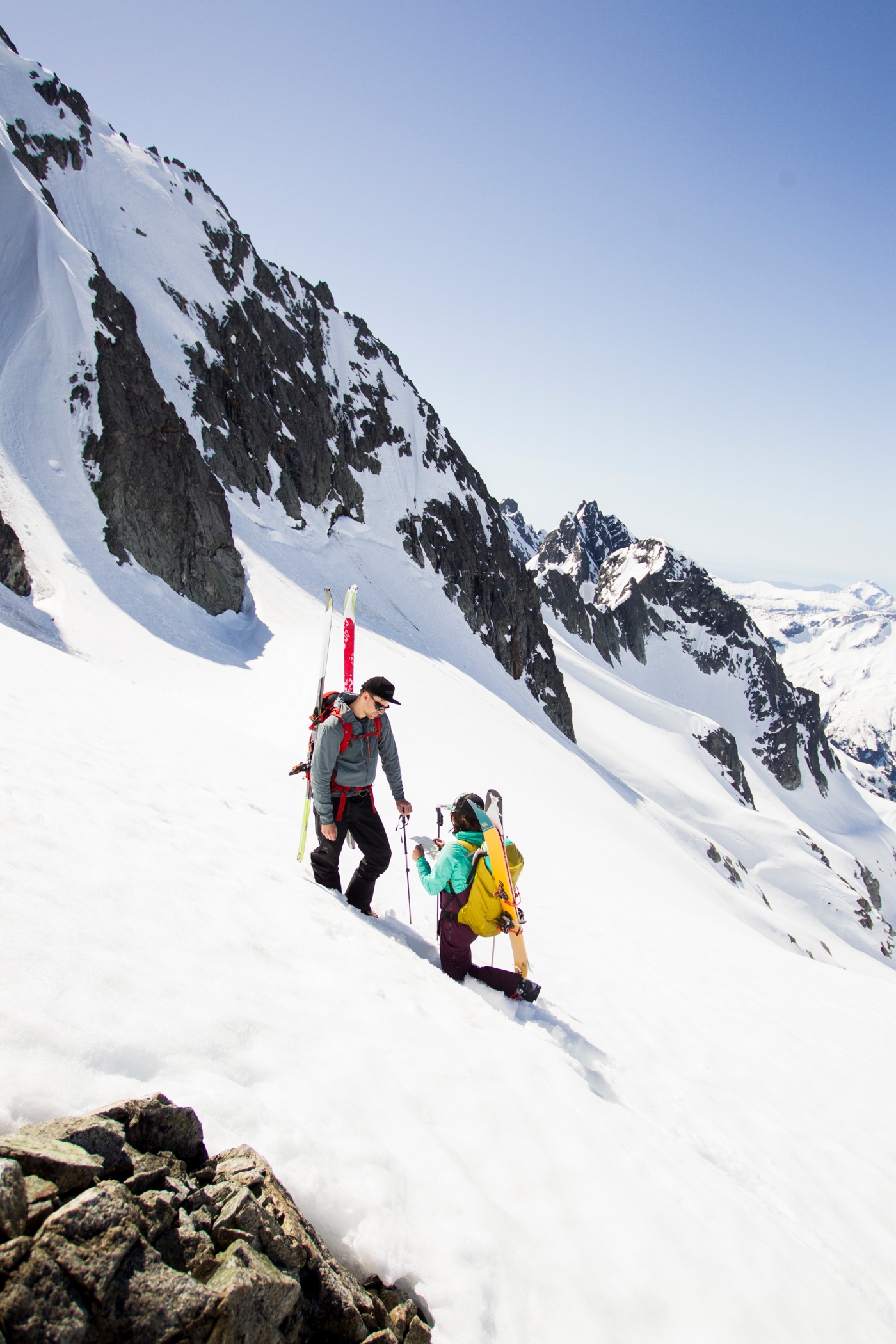 For as long as I can remember, I’ve been in love with the mountains. I’ve loved the way they make me feel so “human” when I’m playing in them. They remind me of my strengths and weaknesses. They lift up my spirit and I desire them deeply when away. They have challenged, encouraged and built up my confidence. For me, being in the mountains is going home. It’s feeling the most like “myself”, whatever that is. I knew the human I should spend my life with must feel this with me. They must understand the ever evolving aspirations to go further. To be present and climb higher.

I met Pearce in 2016, he was working at a climbing gym that I frequented. I thought he was cute and naturally avoided the front desk whenever he worked, he looked me up on the computer. Real cutesy stuff. We first connected over our love for ski touring. I asked him out on a ski date (via Instagram) and the rest became our history. The one thing that caught my attention when I got to know him, was his obvious love and need for the mountains. For fresh air, steep ski lines and that sacred back country solitude.

It wasn’t long before I knew this guy was it. Our mutual love for good coffee, cold weather, British crime dramas and climbing confirmed it. We have mutual patience when one of us is “hangry” or doesn’t feel like leading the next pitch. I put up with his obsession with reading online gear reviews and he deals if I get cold and sad on a bad weather touring mission. We said “I love you” after 2 weeks of dating but came up with a code word so people didn’t think we were crazy. 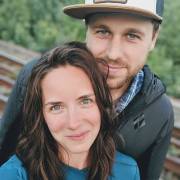 As we approached the end of the ski season, I knew something big was in the works. Pearce had talked about proposing in the next little while and what marriage would look like for us. Eventually the thought occurred to me, I was ready to propose.

We desperately wanted to ski in the Tantalus range but hadn’t had the chance yet. I felt a longing to be there. And I wanted it to be special. And so the plan was born.

I contacted Abby Cooper, a bad-ass Whistler local, with a immense love for writing, photography, snow science and of course – the mountains. Abby and I had followed each other online and often chatted through personal messages about cool places to ski and usually I’d “wow” at her job locations. I specifically picked her to join us because of her connection to the wild places. I knew I wanted someone to share this moment with us who would also feel that pull for the mountains. That alpine wind that grabs at your heart strings and brings you back. Abby didn’t think twice about getting back to the Tantalus range, or shooting the engagement of a mountain lovin’ couple.

As soon as the idea came to me I was in full planning mode. Contact Blackcomb Helicopters, check the weather, check the Avalanche Canada website, read trip reports, pick a date, figure out what I would say and…oh ya, get a ring!

Growing up, I would have never imagined I’d be proposing (let alone 2,100m up, on a mountain doing it). I wasn’t raised with that option. Society didn’t teach me that I could get after it if I wanted to. I was influenced by Disney’s “Prince Charming”, by being “swept off my feet” and “chosen” by a man. So I played by the rules. I gave into predetermined idea’s of femininity and desire. As I grew to the woman I am today, I broke free of those norms. I found my voice, my body and mind.

There’s never been anything “traditional” about our relationship. I asked him out, he does the cooking, we share the truck maintenance and both work labour jobs. We compliment each other, I buy him plants. It’s always been against the norms that we were raised around. Our engagement was definitely out of the ordinary just like whatever celebration of love we create will be.

So on May 10th, 2019, I proposed to my boyfriend in Tantalus Provincial Park.

As we packed our gear for the “Arc’teryx Vancouver photo shoot”, Pearce paced the house giddy with excitement. “I can’t believe were going to ski in the Tantalus” he said multiple times, “what is life!”. He seemed less concerned with the photo shoot portion of the trip (the proposal cover up) and more focused on the turns he could get in. We were both glowing with anticipation. We’d never been across the river and had only heard stories of the majestic, Haberl hut.

I messaged Abby probably 100 times voicing my nerves, excitement and ideas for how it should all play out. She was supportive and equally as stoked, calming my racing mind. We discussed location objectives, safety, gear and established the signal she’d give when we’d found the “spot”.

We met at the Squamish airport at 9 am, ready to fly. As we began loading the basket, it all became so real. Not only were we flying into Narnia, I was going to ask my best friend to do life with me. I’ve flown in helicopters many times over the last 7 years for work, play and search and rescue calls. But I had never heard my heart beat inside of one before. I swear it was trying to make an emergency exit haha.

As we flew across the river, through the valley and the peaks of the Tantalus range emerged, I squeezed Pearce’s hand. This was really happening.
I could see Alpha, Serratus, Mt. Tantalus, Red Tusk, Omega, Pelops, Dione…etc. The terrain was stunning and endless. And smack dab in the middle, was the hut. Impossible to miss with it’s quirky colours and bold position. In the horizon was the Pacific ocean and many more great peaks. This is wonderland, I thought to myself. The place of endless possibilities.

As we slapped on our skins, the realness of the moment that lay ahead became apparent. All the stealthy planning and coordinating was coming to fruition and I couldn’t have been more ready.

As we skinned into the shadows of the mighty peaks, we all looked comfortable and giddy. Everyone was in their element, which could’t have made for a better vibe going into the proposal. As we a-framed up to a rocky summit, Abby gestured it was time.

I turned around and looked at the world before me, I saw Pearce, powerful mountains, snow, smiles, ravens over head and suddenly I was surrounded by everything I love. I knew it was time.

As I got down on one knee, I immediately post holed through the snow, which made Pearce giggle and then start to clue in with what was about to happen. He said something along the lines of “there’s no way this is happening right now” as I started to read a note I’d composed. My voice became shaky, the words became sloppy and tears formed under my glacier glasses. I could hardly keep it together but neither could he. At the end of my blubber, I asked him one final question, “will you do life with me”? 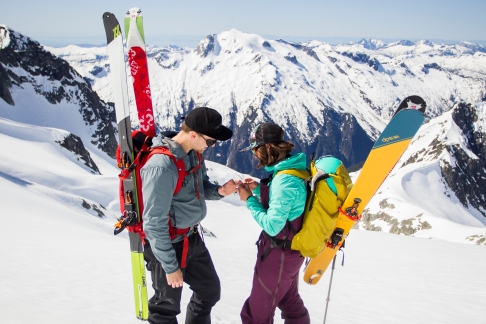 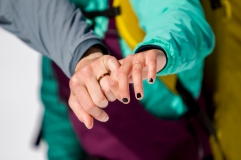 What followed was a whirlwind of tears, laughs, post holing, more laughing, shutter clicks and admiring our ring fingers. We sat for awhile and soaked in the views as we peered down towards the tiny hut.

Abby captured the essence of us in our moment – excited, content and in our happy place. The second best part of the day had come as we clicked our heals in to ride some lines (after a bit of snow safety and data recording with Abby). The spring slush sprayed and our smiles got even bigger as the image of skiing in the Tantalus range became reality.

We arrived back to an empty hut and did some exploring before our heli was due back. Abby got some shots as we basked in the sun and exhilaration of our engagement. We both felt on top of the world. It was truly better than I could have dreamed up…

When we arrived home, Pearce shared the news: “Nothing about my life is “normal”. I love it this way. Sarah and I have always gone against the grain. Maybe we’re rebellious? Maybe we’re just progressive. Either way, today was no different. @mountaindarlin myself and @abbydells flew into the Tantalus mountain range this morning. I was thinking today was about a photo shoot for a brand Sarah works with. Turns out she proposed! I said YES. Now we are engaged! Let’s do the damn thing!”

Thank you to Abby, Blackcomb Helicopters and Arc’teryx Vancouver for helping me pull this off! We are on to the next chapter of the adventure we call life, there’s more mountains to summit, trails to run, espresso to drink. Stay tuned!

And to any ladies out there looking for some inspiration, stop waiting, start doing. We have the power to rewrite our narrative, to be equals, to find love and deserve it.